I decided to write this series as I was approached by Facebook employees last year regarding the Women of Overwatch group (my first group) and they are actively using us as an example of how to run a successful, non-toxic group. Quote from FB ‘We see a lot of groups, but your group is the best, least toxic group we have encountered’. Facebook seems to think that the formula that we use works, so we thought we’d share it with you.

In our first installment we looked at the basics of creating your group. In part 2, we look at actual examples and some easy things you can do to make the group run smoother, be better for the members, and ultimately raise your profile (thus gaining more business).

For this example, I am going to use Oxford Community, the largest community group for Oxfordshire at 14.9k + members. The group averages about 100 member requests every three days. (Note that this group is great for us as a web design Oxford agency, as we are deeply rooted in the Oxford community where most of our business is from). 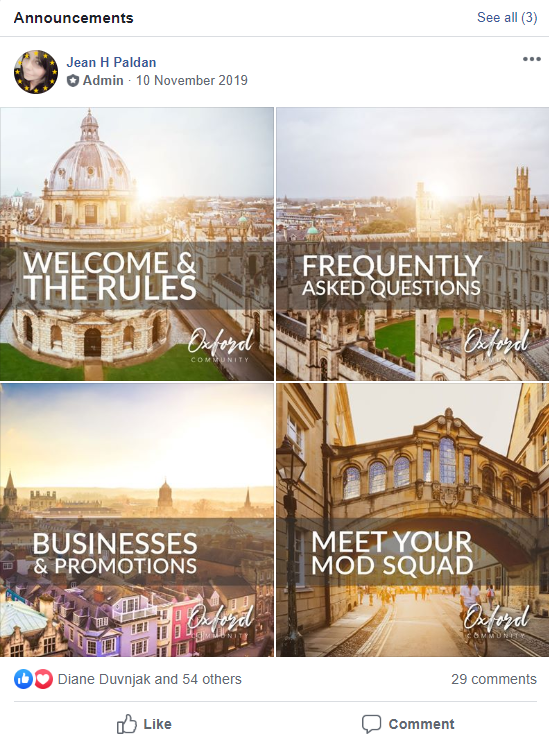 1. Make the rules and group information really easy to find.

Create four images, each 800 x 800 px. On each of the photos, you should put a title of what the image is about. When you then click, on say the Welcome & The Rules photo, you then get a list of all of the group rules in one place.

And this is the important part…pin these four images as an announcement at the top of the page so that it’s always there for people to find. 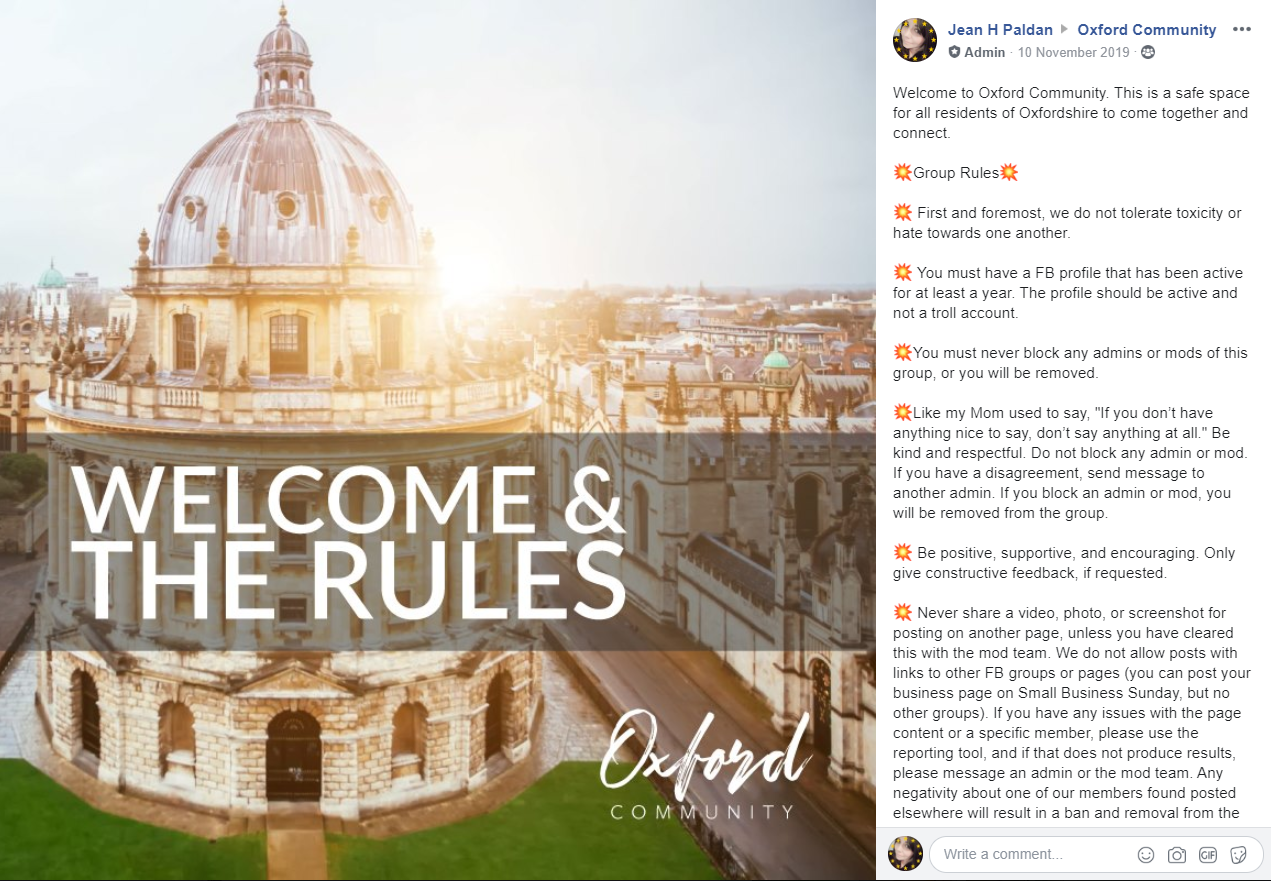 After running groups for four years, I recommend the four images to be titled as seen in the screenshot:

In my experience, groups need roughly the same basic set of rules.  The first and most important is something my Mom used to tell me, ‘if you don’t have anything nice to say, don’t say anything at all’…and I add onto that, just keep scrolling. Healthy debate in a group is fine, but a member being outright mean, or are just not adding anything positive to a group, don’t need to be there.

You want an active community with members who are there to support one another. Remember,  it’s not about the numbers in the group, it’s about the quality of the posts from the members and how happy the group is as a whole.

Other simple rules that I find have helped:

a. Members must not ever block an admin or mod, or they will be removed. Admins and mods can’t do their jobs if they are blocked by a member of the group.

b. Tell members to only give constructive criticism if it is ASKED for. This rule has saved a lot of arguments.

c. This sounds like it would be common sense, but state that members cannot take screenshots of other members FB pages and share them. I have had trolls do this and it’s never pleasant…if you make it a rule, you can easily remove members.

d. Have a three strike policy. For minor offences like being a bit rude, not following the only post about your business on a Sunday (people forget, or new members didn’t read all the rules), give people warnings. Then if they do it three times, they are out.  To keep track, mute the offending member (we do a standard 7 day mute so they get we’re serious), FB admin panel will show how many times a member has been muted and how many posts/comments were deleted. Once they have done it three times, remove them from the group and I can’t stress this enough BLOCK them from the group. This makes it so that they cannot find the group and throw hate your way.

e. Have a list of no strikes you’re out offences. If someone threatens someone, if someone uses blatant hate speech (racist, etc), if someone posts revenge nudes (yep this happened to friend who runs another group)…pick up that ban hammer immediately.

Your rules should be fluid and adapt and change as and when you need them. But I do advise to keep them to a minimum so that it’s easier for you to manage, and the members don’t feel like they are living under a dictatorship.

3. Keep business posts to one day a week.

I know this sounds counterproductive, but a good group isn’t about you and promoting your business, it’s about the community that you are curating. Once you have established yourself as reputable in the community, people will come to you for business naturally, so don’t ever be pushy about your business. No one wants to be sold to all of the time. All of my groups have a strict rule that you can only post advertisements or self-promotional things on, what I call Small Business Sunday. It also makes a great hashtag. #SmallBusinessSunday.

Note that I only post about my personal businesses about once a month on Small Business Sunday. I more often react to other business posts on Sunday and comment on their websites and how they could improve them through design or SEO (if it needs it, if it’s great, I say so).

Pro tip: events, classes or anything that has a date and a time, let those be posted whenever as that helps bring a community closer in the real world. Also let artists and photographers post their work if it is in relation to your community, just without the blatant links to their website or personal FB pages.

4.  Feature a member’s business or artist.

Once a month, (or as much as you have time for),  create a post that has a ‘Recommended Business’ or ‘Featured Business’. Showcase a valuable member of the community by posting about them and their small business that you can personally vouch for. I don’t recommend featuring people who work for large corporations, it is about the little guy. Why do this? Good karma…the more good you throw into the universe, the more you will get back.  I also tag these posts with ‘Recommended Business’ so that members can quickly find businesses that the Community has recommended. 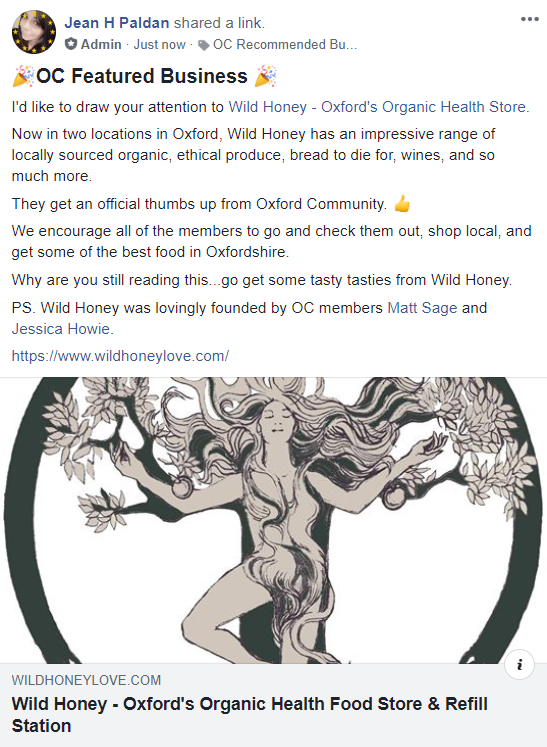 You cannot run a large group on your own. It doesn’t work. First, you need epic people to help you run this.  You are going to need people who are on FB, who are not too heavy-handed with throwing out mutes and bans and can deescalate a situation (you will find not everyone has the ability to be ‘Switzerland’).

For example, Brexit and Trump, in general, have stirred up a lot of debates in the groups. A lot of groups do a sweeping ban on anything political.  I for one think that politics is important and we as adults should be able to have intelligent conversations about difficult topics. But make the choice that is best for your group.

That being said, to get great Mods, first get some people on board that you know in the real world. Once the group is established and you have a few hundred people, add in some more. Do a shout out in the group, and people will come forward. If it’s an international group, make sure you have people in different time zones. You don’t need a lot of people to run a group. In fact, too many people and it becomes chaos and unable to manage. The max amount of mods I recommend is six for a group of 20k or less if you allow people to post freely. If you have mod approved only posts then I suggest 8 but no more.  And only have 2 admins max.

Now that you have your mods, create a group chat. This way if there is an issue with something and you’re not sure, you can discuss it amongst yourselves and come to a decision on things together. It makes for a stronger community if things are fair.

The best way to make this work is to make yourself stand out as a fair and balanced group. Don’t use this as a self promotion platform…use it to build your status within the community that you have curated, and the work will naturally come to you.  Love in Oxford, Google & Facebook…Jeannie

We are very pleased with Rare Form's creation of our new website for John Gowing Jewellers. They have been very friendly, helpful and professional throughout - would thoroughly recommend their excellent services.